The William IV has been claimed as the first real bawley, a little craft of only four tons she was built around 1830. From then on each boat built tended to be bigger than the last. The Happy Home , built in 1890, and a good example of the final state of evolution, was 34 ft 10 in. long 12 ft 9 in. beam, and 5 ft 2 in. draft, going 10 1/2 tons measurement. The bawley’s great beam enabled them to carry huge sail plans; The Happy Home’s mast and topmast were together fifty feet long and she would carry nearly a thousand square feet of working sail in addition to kites.

This is the earliest picture I have found where I have a connection to one of the boats. Angler belonged to my Great grandfather Samuel R Turnnidge born 1852 died 1934.

The second son Samuel Robert Turnnidge was named after his father but was always known as Bob he was born in 1882 and died in 1966.

Bob’s boat Iris (LO245) laying in the ray.His third son Walter John Turnnidge (my Grandfather) was born 1886 and died in 1965. There are a set of four paintings by local Leigh artist Vic Ellis R.S.M.A. of LO7 Ellen (see my web site art gallery) belonging to my family.

Glenalver laying in leigh creek with no topmast set.During the second world war Philmer was called up into the National Fire Service so he could not use Glenalver. Philmer loand his boat to his brother-in-law Fredrick Cotgrove Known as Tate. In September 1942 the following article appeared in the Southend Standard. 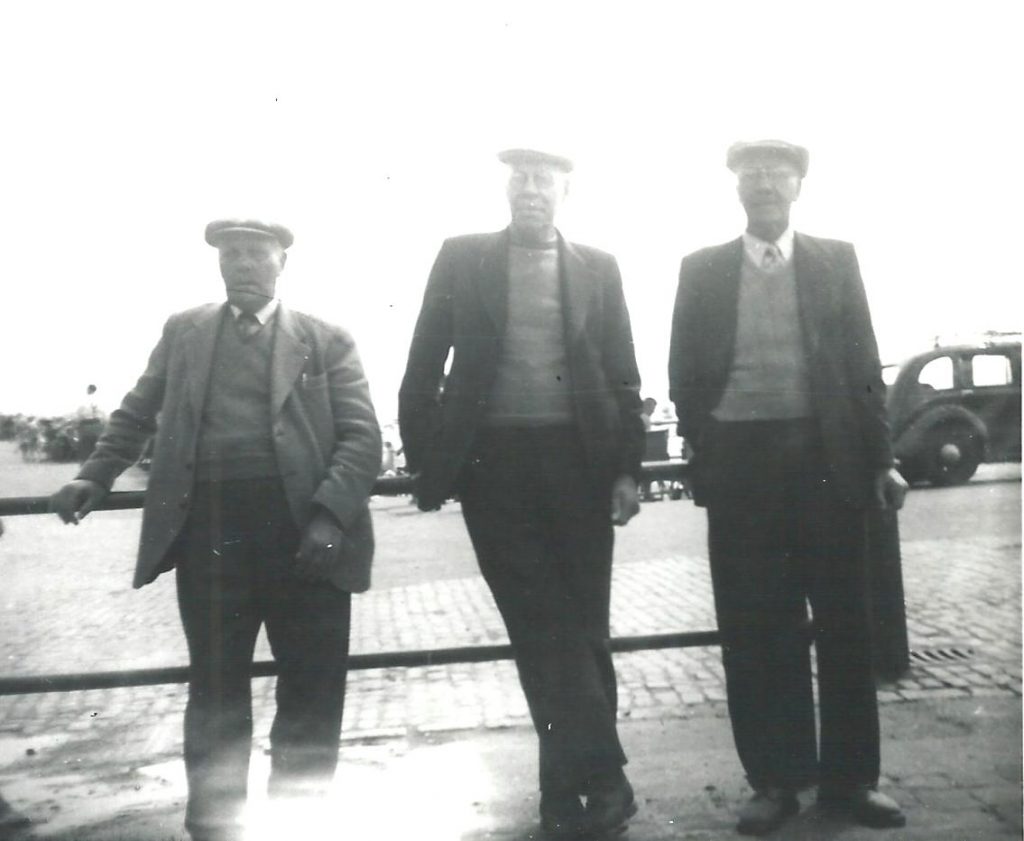 From the Southed Standard of the 25 September 1941

The loss is reported of a Leigh Bawley and her crew of two.  The boat in question was owned by Mr Philmer. F. Turnnidge, of Hillside Road, Leigh.

In his absence Mr Fredrick George (Tate) Cotgrove aged 69 of 10 Hillside Road, Leigh and  Arthur (Blonden) Carter, aged 56 years of Norman Terrace Leigh were manning the boat and both lost their lives.

Among other Leigh men who were in the vicinity was Mr Cotgrove’s brother-in-law Mr Arthur (Whitehead) Turnnidge. He witnessed the accident.

Both the men were members of Old Leigh fishing families and had lived all their lives in the Old Town where they were well known and popular figures.  Mr Cotgrove and his son accompanied the London swimmer, E.H.Temme, on his Channel Crossing and Temme made his home for some years with the Cotgroves while he underwent his training.  On several occasions Mr Cotgrove, in his boat, guided Temme successfully in the Essex Long Distance Swimming Championship from the Pier to Bell Wharf.  Mr Cotgrove was formerly the owner of the Bawley Honour.  Just prior to the war he took over the post of waterman to the Essex Yacht Club.  He is survived by a widow, formerly a Miss Emma Turnnidge, daughter of the late Mr Samuel Turnnidge a member of the old Leigh Urban District Council, two sons,  Mr Fredrick Cotgrove a member of the Leigh Fire Brigade and Driver Graham Cotgrove, now in the Army and a daughter, Mrs Ritchie of Lymington Avenue, Leigh.  Mr Carter leaves only a widow.

Mr Philmer (Jim) Turnnidge, son of owner of the Bawley, would have been on board at the time of the accident had he not joined the Royal Navy a week previously.

Remember that this article was published during the war and would be subject to sensorship.  The full story was published in the Southend evening Echo 19 September 1991 50 years later written by his grandson Terry Cotgrove.

From the Southed Evening Echo of the 19 September 1991

Tragedy is no stranger to the seafaring families of Old Leigh.  But one that shook the tightly-knit community 50 years ago today could not be told outside the town because of wartime reporting restrictions.  Terry Cotgrove describes how his Grandfather lost his life by a chance twist of fate.

It was a typical early autumn day in late September 1941.  The fishermen of Old Leigh had left on the tide to fill their nets with much needed fish and shrimps for a war rationed country.  They stuck together in these dangerous times, only working grounds which they thought to be safe from enemy attack.

They had been working in Gravesend reach and the catches had been good.  It was, and still is, normal practice to leave Old Leigh on the last of the ebb tide in the morning, working the fishing grounds over the low water and returning on the next tide.  But because the tides run about an hour later each day it was necessary to change tides once in a while.

Today was such a day.  Today the boats left as soon as they floated and made for the Jenkin’s Swatchway just off the Kent coast opposite Leigh.  It was nearer than Gravesend and they wanted as much time with the nets down as the tide would allow them.

They would have just one haul and return on the same tide ready for an early start next morning.

Nets cast, the men waited patiently for them to fill. Some pottered about doing odd repair jobs, others sat worrying about the fate of their sons who were away fighting in the war.

Suddenly the silence was broken by a huge explosion.  The sky filled with smoke and debris raining down on the fishermen and their boats.  As the air cleared it was seen that one was missing.  It was the Glenalva.

She had hit one of a cluster of mines that had been dropped unseen during the night.  She took with her to her watery grave skipper Frederick (Tate) Cotgrove who lived with his wife in Hillside road in Old Leigh, and his mate Arthur (Blonden) Carter who lived in one of the wooden cottages that still cling to the side of the hill that is topped by St Clement’s Church.

Frederick (Tate) Cotgrove had lived in Old Leigh all his life.  His ancestors could be traced back to the 1600’s.  His wife Emma was the daughter of Samuel Turnnidge a much respected member of the Leigh Urban District council before it merged with Southend.  Between them they had brought up three children Fred, Lillian and Graham.

Because so many men in Leigh had the same names it was tradition to give everyone a nickname.  Fred’s was Tate.  Why it was Tate I do not know, but mention the word Tate to any old fisherman in Leigh even today and his face would light up with a smile as he recalls a man who was loved by all.  He was a great character always ready for a yarn and a joke.

At 69 he sold his own boat, the Honour and retired.  But keen to continue his love of the river he took a part time job as waterman to the Essex Yacht Club, which involved taking the yachties as he used to call them out to their boats in a skiff.

But a twist of fate was awaiting Tate.  In 1938 his brother-in-law Philmer Turnnidge had had a new boat the Glenalva built by Leigh firm Johnson and Jago.

She was a beauty.  Fitted with a modern diesel she was a better boat than Tate had ever had.  His faithful Honour was built for sail and although she had an engine fitted in later years it was second hand and not very reliable.  It was said he used to be the first man aboard his boat in the morning, but by the time he had the engine started he was the last one to raise anchor.

Now Tate’s brother-in-law had been called up into the fire brigade and the Glenalva was lying idle.  Philmer suggested to Tate that he take her out.  It was too good an opportunity to miss.  His young nephew Philmer known to everyone as Jim, who lived in Danescroft Drive Leigh would have been Tate’s crew but he, too was called into service just days before the fateful morning when Tate met his untimely end.

Next day, deeply shocked brother-in-law Philmer went out on the Reminder, which can still be seen  moored in the creek at Leigh, to salvage what he could of his boat and its crew.  All he could find was a torn sail, the net and a huge crater in the mud.

Tate has no grave.  His only memorial is a scroll from the King commemorating his courage.  It still hangs in the hall of his house in Hillside Road.

I have created a spread sheet of Leigh Bawleys, if you have any information, corrections or additions please let me know by Email at Howard.Turnnidge@hotmail.co.uk and I will update the sheet.